Israeli pharmaceutical company Teva was established in 1901 and over time became a world leader in the production of generic drugs.

The company belongs among the TOP 15 pharmaceutical companies on the global market, demonstrated by the fact that 2,500 prescriptions with Teva products are written every minute worldwide.

The main objective of the campaign was to raise awareness for two relatively little-known Teva products – Dolobene gel and Diclobene.

The quite broad target group for the generic drug Diclobene also brought another challenge: designing a successful and effective campaign that ought to resonate with everyone.

We were tasked with increasing their brand awareness as well as saleability by increasing the credibility of Dolobene gel and Diclobene and by illustrating possibilities for their use. At the beginning of our co-operation, both products had minimum market share in Slovakia.

We had to adjust aspects of the campaign, as well as the communications, to different target groups for the products.

Regarding Dolobene gel, we communicated its special combination of 3 components in 1 package and also a crucial benefit for the target group – the faster treatment of injuries. Dolobene gel is especially intended for athletes and young active people.

The second product was Diclobene. The product is suitable for anyone who suffers from acute pain, but unlike Dolobene, it has no unique characteristics that differentiates it from its competitors. Therefore, we focused on communicating its benefits in terms of 3 different forms of rapid pain relief.

Implementing the campaign to increase awareness for Diclobene gel and Dolobene consisted of the synergy of multiple components.

The basic idea was to design visuals so that were customized for the target groups – from taking photos of the products to creating the materials themselves.

We increased awareness of the products by placing posters, leaflets and other promotional materials in pharmacies. POS (Point of Sale) materials reached people directly at the time of purchase.

We also used periodicals read by the target groups. We placed two pages with key visuals for Dolobene gel alongside a PR article in selected sports magazines for runners, hikers, cyclists, etc. 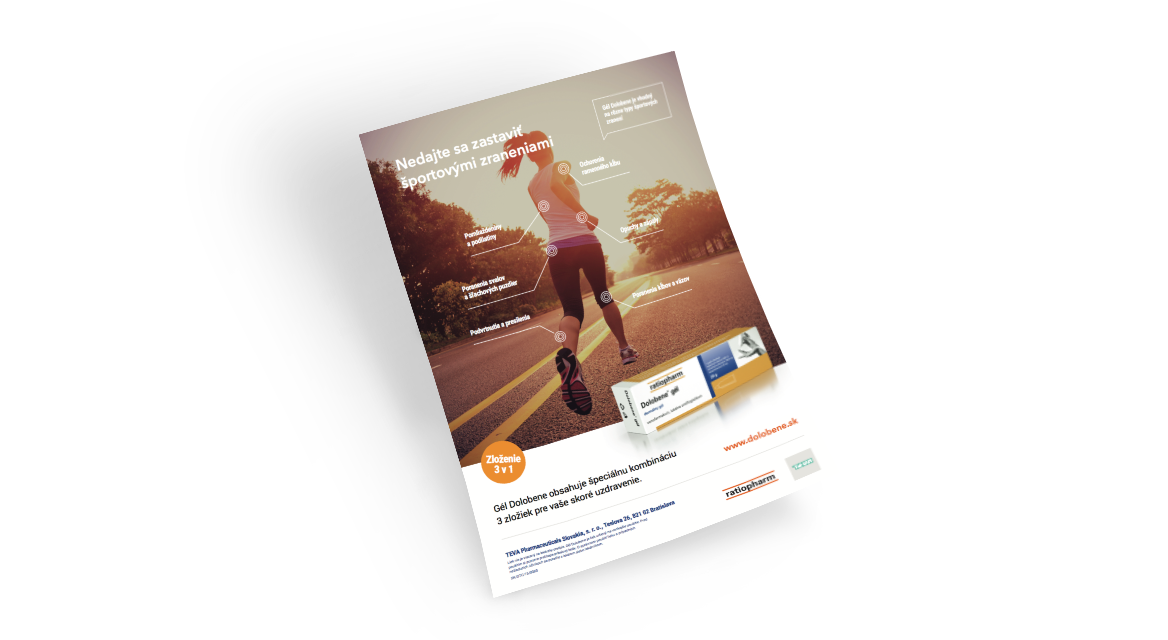 We created two microsites which allowed us to communicate all the benefits of the products.
We customized their form and content for the target groups:

Both websites encouraged people to action – making purchases at a pharmacy. Direct links to the most popular on-line pharmacies were available on the websites. 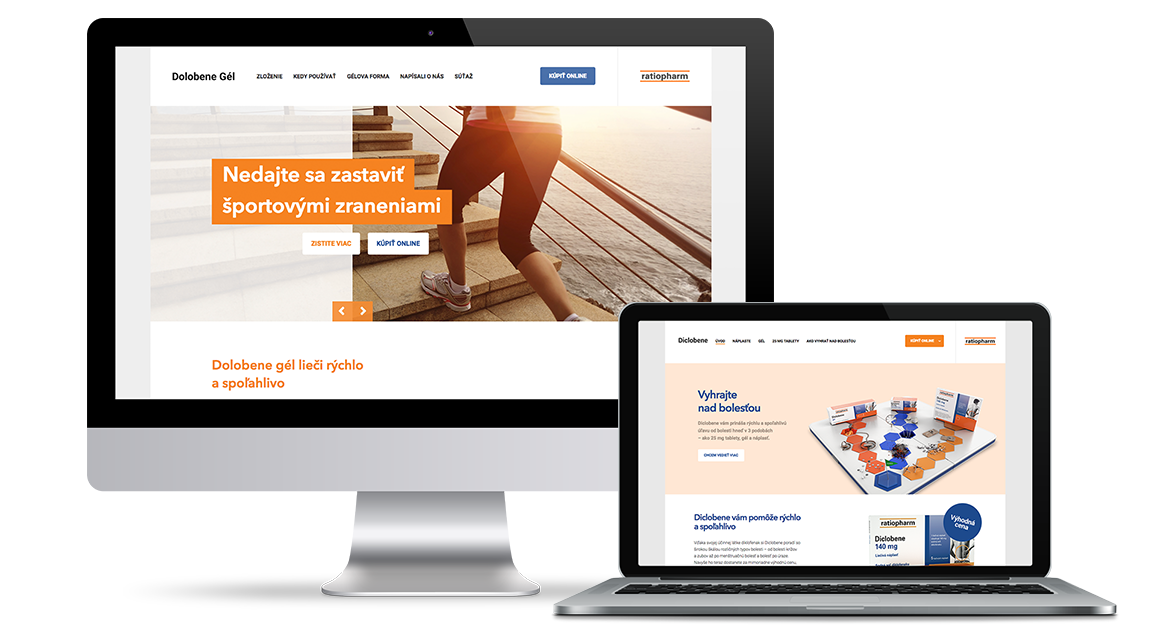 People could take a part in a competition for valuable prizes on both microsites. Gift vouchers for the purchase of sports equipment were made available on the website www.dolobene.sk and a wellness vacation for regeneration on the website www.diclobene.sk. The selection of these prizes was not random – they were intended to reinforce the desired brand position in customers’ minds.

The competitions served primarily for collecting e-mail addresses which we used in newsletter campaigns later on.

We used animated and static banners in display, Facebook and remarketing campaigns. We displayed banners on websites visited by the target groups instead of placing them on specific websites by content. Thanks to this approach, we were able to reach real athletes, for example, instead of unengaged visitors to sports websites. 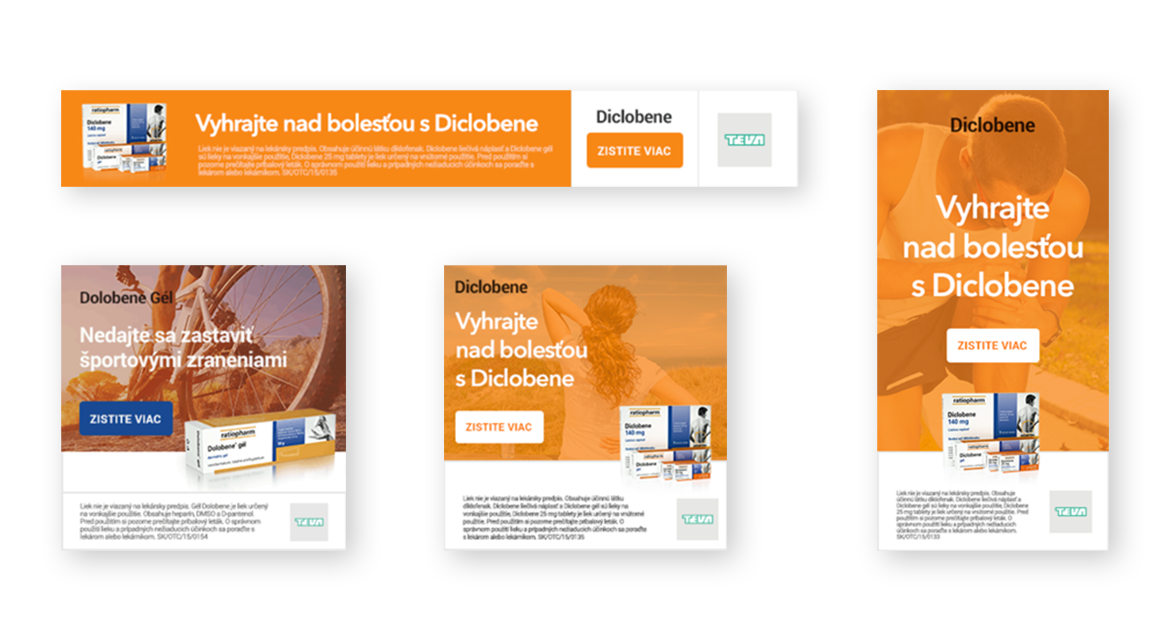 We placed PR articles about the products on carefully selected portals. We published Diclobene articles on health portals, while Dolobene was mainly presented on websites about cycling, running or hiking. Native PR articles helped us to enhance the credibility of the products and illustrate possibilities for their use.

We reached more than half of the Internet population in Slovakia, which represents about 1.7 million users. The number of views from the target groups was over 23 million views. Immediate interest in product purchase via on-line pharmacies consisted of 1,000 people.

For both products, we laid the foundations for the development of relationships, credibility and top-of-mind awareness. The market position and further sales can be built excellently on top of these foundations.

We managed to obtain long-term results beyond the duration of the campaign, which was an important basis for helping the brands become visible, memorable and preferred.